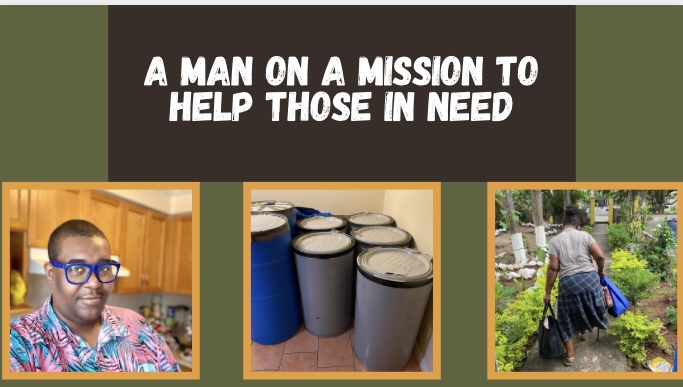 Leadership is more than filing reports and issuing orders.

“Leaders motivate us to go places that we would never otherwise go; [they] have the ability to attract followers, ” said globally recognized leadership expert, Michael Maccoby . His words aptly describe what comes to my mind when I think about a leader – someone who inspires people to act.

Kareem Constantine, a humble man born and raised in Clarendon, epitomizes a true leader who understands his responsibility to give back to his community. He has been inspiring others to give back to those in need through his annual Collection Drive in Jamaica for 8 years.

“I was raised never to take things for granted, always be thankful for my blessings and to be my brother’s keeper. Seeing [basic necessities being wasted] by people in my residence on campus caused me to spring into action,” he said when asked about the initial motivation behind this Collection Drive. He has been rallying support for this worthy cause and plans to make the 2020 edition the best one yet.

I caught up with him recently to learn more about his work and the support he needs to make this year’s drive a success.

How did this Collection Drive start?

It was June 2007 and my first year at the University of the West Indies (UWI), Mona, Jamaica was about to end. I was a resident on campus, living on Rex Nettleford Hall. Students were moving out as their exams had ended, but I observed a disturbing trend; large quantities of perfectly good food, clothes, personal hygiene products, cleaning supplies and even small household appliances were being thrown out.

I decided I had to do something. I started walking around asking people for their leftover food and items. Word spread and everyone was so supportive. As more students moved off the hall, the support became too overwhelming for me to collect on my own. Therefore, I solicited the help of my friends to collect as well.

Little did I know that word had spread further than the confines of my hall and made its way on campus. I received a call from the late Donna Falconer, Guild Office Secretary, one day asking me to drop by her office because she heard about my Collection Drive and would love some support for a family in Vinyard Town where she was from. It turned out that a large family of four single mothers and their 9 children had recently lost everything, except a bed frame, in a fire.

I decided that since I was just accumulating items with no clear recipient in mind, I would just give everything to that family. There were many tears of joy. They were so appreciative.

By my second year, I knew what I was getting into and started early. I made posters with clear instructions. Everyone already knew about the first Collection Drive and started asking from early if it was going to be a yearly thing. It surely was!

I collected so many things in the second year that I was given the services of a bus for free. The entire bus was completely packed. I contacted Missionaries of the Poor and they were happy to accept everything.

This continued for years until the university started having two cohorts per year, with the second batch entering in January. This also meant students would finish at two different times per year. I jumped on that opportunity and started running a Collection Drive twice per year. I ran Collection Drives from 2007 to 2014. During that time, many people, causes and charities benefited –  fire victims, to a young HIV+ mother, Missionaries of the Poor and Mustard Seed Communities to name a few.

Unfortunately, I took a break between 2015 to 2018 because I had moved back to Canada. Some of my friends who had supported me through the years while we were in university were also now residing in Toronto and they convinced me to restart the drive in 2019. So, in summer 2019 I decided to do a Collection Drive and ship the items back to Jamaica to benefit families in need in the two communities I grew up in (Sandy Bay and Hayes both in Clarendon). These communities are also the focus of this year’s drive because of the great need.

What has been the greatest need?

How has/COVID-19 impacted your community? How will this drive help address some of these challenges?

Curfews have restricted movement and limited the livelihood of many people in my communities. Additionally, both communities have experienced complete lockdowns at some point since the pandemic, prohibiting people from going to work. Income is, therefore, either low or non-existent.

This year’s Collection Drive will focus on distributing care packages to as many people as possible. The distribution will occur in the Christmas season so that families can get a little break for Christmas.

Are you working on this alone?

My friends have been helping me promote the drive and identify good deals on items. So, they shoot me a picture whenever they come across something inexpensive and tell me where I can get it. My packing team of friends will come by in November to pack the barrels and get them ready to be picked up for shipping. The last leg is distribution, and that will be done with the help of my family in Jamaica.

Will something be released after the distribution date to show how the money was spent?

I plan to post updates on my GoFundMe page showing the receipts totalling the amount donated. My dilemma is taking pictures of recipients of care packages. Personally, I don’t want to because I think these people have already been through enough so putting them on some sort of a show and tell might not be the best idea, but I acknowledge and understand that there are many self-serving people out there who solicit money from people under false pretence. So I will do my best to take more pictures of the distribution process and also post those on the GoFundMe updates page.

When does the Collection Drive end?

I close collections on October 30, 2020. This will allow the team and I enough time to finish packing for pickup the following week. The items will be distributed in December, just in time for Christmas.

How can people contribute?

If you live in Toronto, Canada, you can donate physical items by either dropping them off or preparing them and I will do the pickup. They can contact me on any social media @kreemy1983 to make arrangements.

If you live in Canada but not in Toronto, you can send me an eTransfer via email at kareemconstantine@hotmail.com or you can donate directly to my GoFundMe campaign by clicking here. You can also donate via the GoFundMe link regardless of where you live in the world.

Someone donated $5 and as little as it may seem, I am eternally grateful! It simply means that everyone has an opportunity to give and pour into the lives of others by using me as a medium to pool the resources of many. Little is much when God is in it! And as we say in Jamaica, “One one cocoa full basket.”